Probably, they would both say that the language they are trying to learn is hard. Is any of them right? Perhaps both of them are. Different languages reflect different thought patterns, which can be seen in their grammar structures. These ways of thinking also influence culture. That is why an English speaker finds it hard to “think in Spanish,” for example, which should be the goal of every foreign language student. A Spanish speaker may find that Italian, French, and Portuguese are more similar languages since they all come from Latin.

English and Spanish have a different structure. For example, it is wonderful that in English you can modify a noun only by adding adjectives –and even other nouns– before the noun, as in:

Besides, adjectives in English do not change for gender and number agreement as it happens in Spanish. This is because English is an analytic language.

A language is called analytic when its words are not subject to many changes to show gender, plurals, verb forms, etc. Whereas synthetic languages add (lots of) affixes to words to express gender, number, tense, mood, etc. English is an analytic language, while Spanish is a synthetic language. You can see what I mean in this comparative chart: 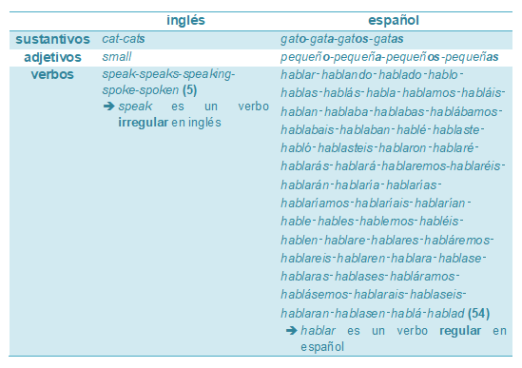 You could say English is easier, since it does not have so many verb forms, for example. You could also say that Spanish is more practical, since these more specific forms allow the speaker to remove the subject (you can say “Hablo español,” instead of “Yo hablo español”). Also, you do not need to follow a rigid structure. However, if you ask me, I think studying pages and pages of regular ─Spanish has three regular verb form patterns─ and irregular verb forms ─the Royal Spanish Academy lists 59 models for irregular verb forms─ is a lot harder.

Learning how to read in Spanish is pretty straightforward. You can learn the sounds made by the consonants in combination with the 5 vowels, a few rules about stress, and end of story. You can read anything that comes before your eyes, even if you do not understand what it means.

English, however, is not so easy. The relationship between spelling and pronunciation can be hard even for native speakers and a nightmare for those who try to learn English. Of course, there are reasons for this, especially related to the history of the English language. Besides, its pronunciation is beautiful —in my opinion, at least. And it is not impossible to learn. Many of us have tried and succeeded.

Every language has its charms and challenges. It is worth giving a chance to the language you like the most. After all, “to learn a language is to have one more window from which to look at the world.”

What do you think? Is Spanish easier to learn than English? Why? Your opinions and suggestions are welcome! Did you enjoy the article? Like it and share it with your friends!

Click here to find out how I can help you meet your linguistic needs.

[2] This is very frequent in English, and represents a real challenge for translators into Spanish, who have to juggle in order to find a way to avoid so many prepositions.

1 thought on “Is Spanish Harder Than English?”